OUR FIRST OF MANY BIG GIVEAWAYS! - Gore Noir Magazine 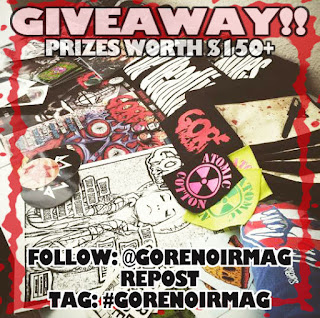 Want to win a bunch of product?  We get a bunch of cool stuff in the mail and a lot of it we aren't able to use or we get duplicates of.. I mean..  There's just so much STUFF!  So what are we doing with it then?  Well we're giving it to you people that's what!  Want to have your product featured on one of our future stuff videos?  Send it to us!

Ready for how to win?  OKAY HERE GOES!  Follow us on instagram: @gorenoirmag then repost the photo to the left there <<--- and tag us and also hashtag #gorenoirmag  it's that easy!!  But wait you say..  You don't have Instagram?  Well we still have a chance for you to win!  Go subscribe to our YouTube channel and/or comment on the video for another 2 chances to win.  Do all 3 and you'll get 3 entries into the contest.  Do we allow reposts on Instagram?  We will let you repost every 3 days.  We will run this for 2 weeks.  Starting tonight and ending September 15th.  We will pick one random winner to get the whole package!

OH no you lost?  Well we will also throw out some free digital issues and free digital subscriptions if we see you reposting every 3 days on Instagram and we see you did all 3 things.  We reward awesome people who help us get the word out.  READY?  GOOOOOOOOOOOOOOOOO!!!  Now watch the video for a look at a bunch of (not all) of the cool stuff we're giving away (and that we got in the mail and are keeping na nana boo boo!)


People Featured in this video:

THE VISIT for a new live Snapchat event ONE MINUTE HORROR: THE VISITors to be released live at 5 P.M PST today.The three-part live Snapchat series follows four young locals who visit an old stone house only to find its that the old woman residing there is more dangerous than she appears.
The four youths, played by Acacia Brinley, Teala Dunn, Max Isidor and Zane Hijazi, all find themselves venturing in to an old woman’s creepy house as viewers ‘Snap’ suggestions help guide the characters decision making. But Snapchatters be careful, bad advice could lead to untimely ending at the hands of an evil old grandma. To watch, users will need to add @CryptTV on Snapchat and tune in at 5PM PST.

All Snapchat posts disappear 24 hours after posting, but there’s a special prize for horror fans with a
watchful eye: find the clues hidden in the story that reveals the location of the house, screenshot the
clues and Tweet your guess at @CryptTV and @UniversalHorror if you get it right you and a friend can win an invitation to a special advanced screening of THE VISIT.

So get ready horror fans, can you figure out the clues before the story disappears? Are you going to earnyourself a screening of THE VISIT before the film comes out in September? Tune in at 5 P.M and start snapping!