The Bloody Best Project is DOING exactly what Gore Noir is in the beginning stages of trying to do.  They are depicting your favorite horror celebs in amazing horror photoshoots.  (Although we here at Gore Noir would gladly cover any awesome celeb that is a horror fiend in a nice gore/horror shoot)  We thrive on seeing and bringing to our fans new horror photography!  We look forward to showing you some of Bloody Best's work featuring the likes of Danielle Harris (pictured), Joe Lynch, Kane Hodder, James Gunn, etc..  It's insane how they can almost tell a whole story with just one image.. Their attention to detail is amazing! On a side note we are set up with Tides of Torture which will feature Kane Hodder, Danielle Harris, Tony Todd, and other horror greats.  Tides of Torture is much more than just a horror convention on a cruise ship.. it's a zombie ball.. celeb poker.. bands will be playing.. It's also the first such horror convention on a boat.. Wanna be a part of history?  Bloody Best and Tides are not affiliated although they are both innovators in the horror world.  We are all for innovation and will do anything we can to see more of the same!
Posted by LckyFck at 5:57 PM No comments: 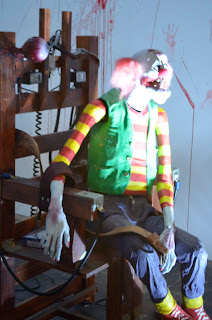 As Halloween gets closer in Hollywood all the horror gets ramped up to the extreme.  It's the perfect time of year for Gore Noir magazine to wiggle it's way into the scene and let people know what we are about.  We arrived at the venue which was Meltdown Comics on Sunset (we walked there that's how close to our house it is) and we were greeted by one of Full Moon's employees who handed us our press passes and we slid in and as we were early we got to snap some shots of the scenery. 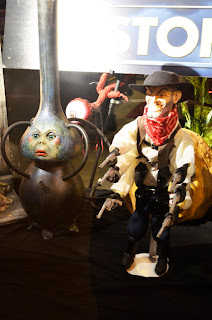 Everyone was pretty much there to see Gary Busey, Charles Band, and Tommy Chong so we stood around for a bit.. handed out some business cards and stickers and finally Tommy came in with his wife along with him.  Seemed like a very nice guy he signed a few things and posed for pictures like a champ.  Next person to come in was Gary Busey..  I've always thought this guy was a nut..  AND IT'S NOW CONFIRMED..  My girlfriend and fellow Gore Noir coworker got a GingerDead Man DVD for him to sign (We have some pictures of him signing the dolls that will go in the mag) and apparently he couldn't hear us as we handed him a free mag.. he just looked at it blankly..  and picked up his sharpie as if to sign it..  And when I tried to get loud and tell him ITS FREE.. He said "JUST WAIT!"..  NUTSO!

We also met Corpsey from Girls and Corpses magazine (awesome mag by the way i've always had much respect for these guys they put out some innovative cool shit) and we exchanged magazines and talked about banner exchanges and all that fun stuff.

All in all it was a good time and we came home with some Full Moon DVDs to watch and some stories to tell..  and we got our hollywood horror feet wet. 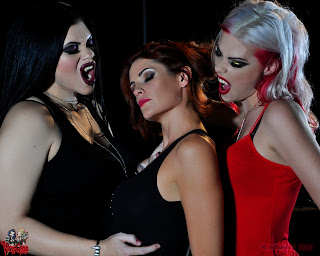 Wouldn't expect any less from a couple horror gals from Las Vegas.  Vampires love feeding on the washed up booze ridden cretins that get lost in the desert.  Who would miss some guy who just dumped his paycheck into a slot machine?  I'm sure it's like snacking on a rum cake.. Get a bit drunk and high off of that hemoglobin.

The set that Gore Noir will be featuring has the Vamp Girls sinking their teeth into some delicious veins that's for sure.  I'm not even a vampire and I wouldn't mind sinking my teeth in!
Posted by LckyFck at 8:33 PM 2 comments: 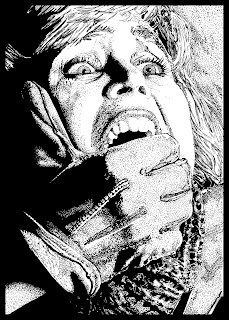 The emotion that Jacob of Abernathy Designs is able to convey in his images is amazing.  Each one looks like it might have been taken from a security camera that just happened to capture something gruesome.  We are transported into the scene and can't help but feel our guts wrenching as the victims are mutilated.

Most of the artwork that Jacob produces is horror based.  Ranging from zombies to mutilations to movie monster favorites.  They are all lurking just beneath the paper in black and white (and even more deadly when he does color).  Pick up issue 3 of Gore Noir Magazine when it comes out to see more of Abernathy Designs!

www.gorenoirmagazine.bigcartel.com
Posted by LckyFck at 8:22 PM No comments: