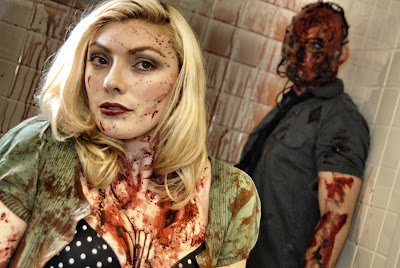 In an era that's being overran by digital blood and effects it's always refreshing to see a film that goes back to the basics and gives us straight up horror.  The Orphan Killer or TOK as most of the fans of the film call it, is a Bloody good slasher horror film that impressed me with it's level of gore.  That's not to say that it relies on the gore as a crutch like some films.  It doesn't just lop off heads just for the sake of being over the top either.  The main character, who the film is named after, is just like you or I. Only difference is he's fucked up in the head at a whole higher level.  Think serial killer meets Michael Myers or Jason Vorhees.  I like how the movie presents us with the back story on TOK and overall I'd say it's a must see.  Did I mention Gore Noir Magazine will feature an interview with Matt Farnsworth the creator and director of TOK?  Oh and that there will be many more photos of the lovely Diane Foster who plays the Heroine Audrey in the film?  Well consider it mentioned!  Look for all that and more in the 6th issue coming in June/July.