Have you seen The Witch yet?  I opted out of sitting in Austin traffic the other day and just popped into the South Lamar Alamo Drafthouse to watch it all by my lonesome because..  Not one of my movie going friends would go with me to see it.  They're all pansies I guess?  Anyway!  I got my cookie dough shake and queso fries and pealed my eyes to watch it..  Oh and I posted on Instagram that I was watching it of course..  Because if it doesn't get posted to Instagram it didn't happen right?  As soon as I throw the post up there the comments start rolling in.. And I expected this..  Don't get me wrong, but I was hearing a lot of good things so I wasn't expecting that many negative comments.  "I didn't like it", "There's a scene in the middle that's ok but overall :(", etc.  There was one positive comment and it was: "I fucking loved this. Easily one of my favorite films of the last 5-6 years."

So why is there all of this opposite side of the spectrum review business?  I think maybe people were expecting something different than what it actually was.  The Witch is a gritty real film about faith, religion, witchcraft, and possession with some satanic elements dashed in.  They aren't thrown in your face at every turn.  You aren't hanging out with witches the whole film.  You don't get to see most of the dastardly things the witches are doing.  A lot of the things are eluded to and it's presented to us in a sombre tone throughout.  It's a very slow burn so for all of the gold fish attention spanned millenials, they were indeed antsy throughout the film.  I guess they should have brought in Michael Bay for a couple explosions for this one?

My favorite part of the film is the cinematography and the uneasy-ness you are plopped into.  I was on edge throughout the movie.  I wasn't able to watch the film as I do most horror films.  Most horror films I'm presented with some beautiful kills displayed for me to dissect and revel in.  I really do love sprays of blood.  I'm sick I know.  Although you do get treated to some blood in The Witch it's only sprinkled in and I was pretty stoked on those moments don't get me wrong.  It's also lacking the elements of sex and nudity that a lot of horror films use as a crutch.  Oh how I do love those crutches though.  There's just enough fantasy in the movie for you to say "Oh okay I'm just watching a movie", but it's added in towards the end and most of the time you are dealing with what most people of the puritanical America would have dealt with.

I was definitely happy with the film and I'll be adding it to my video collection as soon as it comes out for sure.  It's not for everybody.  I can't even really put my finger on the type of people that would enjoy it.  It takes a different mindset.  You'll all just have to watch it to see for yourself.  If you've seen it I'd like you to post in the comments why you liked it or hated it.  Until then check out this Playmobil set by MillionarePlayboy.com !!

Stoya reads from Necrophlia Variations, You'll want to watch till the end!!

OTHER SIDE OF THE DOOR in theatres this Friday! 3/4 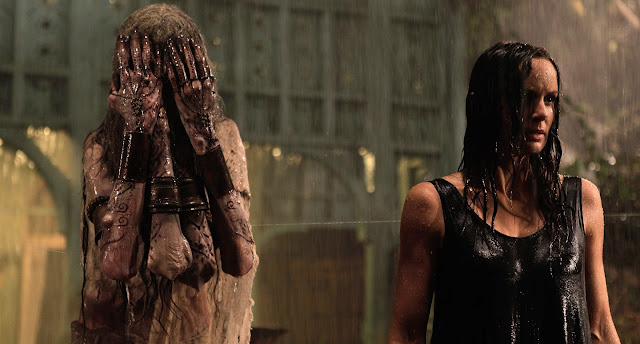 Posted by LckyFck at 9:35 PM No comments: