So when I saw the posts coming up in my social media feed about Doyle coming through Texas I was super stoked.  I mean who wouldn't love to have a chance to interview someone that helped to create some of the most iconic horror punk music in history?  Whether you like them or hate them the Misfits are one of, if not THE biggest band in horror punk and punk in general.  I mean go to the mall and you'll see at least one teen wearing the iconic Misfits skull around.  We won't get into whether or not he's ever heard of the band..

Without really thinking I would land the interview I sent an email to Doyle's manager and awaited a reply.  Not thinking anything of it and really not planning much for the interview at all as I had no inkling that it would actually land in my lap.  Then the email comes back.. And before you know it I'm slated to head to Red 7 in Austin to interview someone who I had just been reading about in "Gimme Something Better" a really good book about punk rock in the Bay Area.  Now before you say.. "Wait the Misfits aren't from California!"  Oh yes I know!  But there's a story in the book about the Misfits playing San Francisco and nearly inciting a riot.  I won't get into too much of what that particular piece said but let's say it didn't paint a pretty picture.

So I've got this interview with Doyle now, and It's the day of and I'm dying trying to do as much research as possible all the while trying to secure equipment to film the interview as our equipment was predisposed.  Finally my good friend comes through with equipment and she's awesome and I get both her and I on the list to do this interview.  (there was a moment where I wasn't going to be on the list but they added me on last second while I was in front of the venue unpacking that's how last minute this was)  Our borrowed tripod head breaks off as we're unpacking and..  Needless to say I'm a bit out of sorts.  We get into the venue and I grab a beer to help calm nerves and I get to talk to my friends from Rebel Flesh as they were the opening band for Doyle.  Which was pretty rad I love those guys and thank you to Doyle for having them!

I'm at the venue waiting on a text or call from Doyle's manager and it comes.  They're at the tour bus which is about 3-4 blocks away.  No problem we grab all our stuff and walk over there.  (Trying to repark in Austin?  Hah!)  We get to the tour bus and knock on the door.  No answer..  I send a text.  She says he's in the bus just knock.. Already did that but hell maybe he was predisposed?  I knock again but harder..  At about this time my nerves are shot and Doyle comes to the door and opens it.

I greet him and he says come in.  As I'm climbing the stairs I notice Brutal the chihuahua is already pretty stoked to see us (read as: sporting a huge dog boner) and I waive for my friend to come in and hurry but I guess she didn't notice because Doyle is now mad that we've left the door open for Brutal to make his great escape.  Which in all honesty he wouldn't be able to run very fast in the state that he was in.

"Are you guys going to be doing video?" Doyle says as he scoops up Brutal while apologizing for Brutal's excitement.

I reply with, "I would like to do video but if it's not possible I'm not worried."

Then Doyle says, "If it's video you'll get 3 minutes, sit down I need to finish getting ready".

We sit down and my assistant starts to set up and get the video working and setting up the mic.  A regular corded mic like if I was some singer on stage.  I've never really used one of these ever for an interview I was conducted.  Especially not when I have to put it in their face and then switch back to mine and then back to them.. You can see in the interview it just wasn't working out as the mic was having problems as well.  So me and the mic are seeing eye to eye..  We're both just not cutting it.  I had done my research and found that just about everyone was asking nothing but questions about his music.  Now we are a horror magazine so I wanted to aim more towards our fan base and ask him horror related questions.

During my research I saw an interview where Doyle had stated he liked listening to horror soundtracks..  And instantly..  I'm like okay this is gold I love horror soundtracks too!  You'll soon see how well that question went.  And I'm going through and listening to their songs and coming up with questions about the songs..  I'm rocking and rolling right?  Flash forward and now 10 minutes after we've arrived at the tour bus, I've apologized to Brutal for not bringing him any little doggy bitches to play with (I really felt sorry for this dog and his 'excitement'), I've tried to make small talk about the Mushroomhead mask sporting a devil-lock, the other guy that was going to interview after me has already tried to make small talk about the band playing over the speakers in the tour bus of which Doyle had no idea who the band was anyway.  So now it's go time right?  Doyle walks over..

So I stand up and greet Doyle again and as I've seen him wearing Ghost shirts before I had brought him our special edition Ghost magazine as a gift right?  So I hand him the magazine and without even looking at it he's put it on the table next to him.  Right off I'm a bit deflated that he didn't even recognize the gesture or the band on the front of the mag.  I'm a deer in the headlights now.  And then the camera starts rolling and I'm interviewing Doyle.  And I'm getting nothing..  And more nothing..  And then I ask a question about the music (which I hate being the run of the mill type of interview but at this point I'm trying to salvage this) and I get a bit more out of him.  But really at this point I'm what poker players call "On Tilt", there's no salvaging this and I'm just not feeling it.  Instead of staying and kissing ass I do what any self respecting person would do.  I walk out.  I thank him and apologize and I walk out.

But me and my assistant are not on the same page and she still needs to pack up.  So now I'm standing there.  This is one of those situations like when you leave a bar with friends and say your goodbyes and hug and then start walking away and realize you have to walk the same way anyway right?  So I'm standing there and Doyle calls out "Next!!" and the poor dude behind me takes my place on the couch and pulls out his mic and his crumpled paper with his questions.  I'm unable to hear what the first question is but I hear loud and clear Doyle say, "Next question!" As I look back I just see this interviewer's hand shaking like a leaf, and finally we're all packed and heading out.  We walk our way to the venue and I'm just kind of still stunned.  Just really out of it.  As soon as we get to the venue I grab a beer and I'm happy to see some friends there that I didn't expect and I'm relaxing now and we watch Doyle play and then it's over.  Now I'm stuck with the decision on whether to publish this interview or not.  So I decide to just put the video up on my personal Facebook.. And people are reacting.. This is when I realize that maybe the world should see the video.

Maybe other people can laugh at it's awkwardness.  Maybe it'll bring some joy to some people.  Maybe a few people will laugh at how horribly I phrase my questions because I was so not prepared for what I was experiencing.  Also I hadn't even noticed that the length of the video unedited as it was sent to me was 1:38.  It didn't dawn on me until someone commented on the video on my Facebook.  The Misfits song We Are 138?  Ever heard of it?  Kismet?  Hahaha!  So I'm going over the lyrics for the song and they fit perfectly into the context of the interview.  It's part of the experience now.. 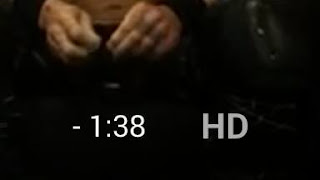