Horror on TV and why Zombieland TV show is not worth your time.. 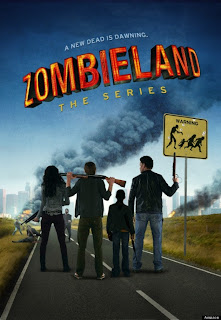 (This is more of a rant then it is a "review" I don't do "reviews" because people try to sound all educated and interesting and that's just not me.  I'd rather ramble aimlessly and just give you my opinion)

All your favorite characters are back for this TV show version of that awesome zombie comedy Zombieland!  Well they DO have the same names..  A few sound and look similar..  And ehmmm..  That's about it?  You know when you get a recipe and you're like..  Fuck it I'm going to try and make this..  And it comes out BEAUTIFULLY!  Who knows how it happened maybe it was some sort of witchcraft but the mix was perfect!  Then the next time you make it, who knows what happens.. You swear you put in the same ingredients..  It should have been the same right?  But it tastes HORRIBLE!?  Well this Zombieland series is that recipe in visual form.  The characters are just really flat in this, seemingly contrived attempt at milking the name for more money.  You can tell that they were coached to try and look/sound/act like the original characters but it just doesn't feel right.

Zombieland WAS originally supposed to be a TV series and maybe it might have done well if they were able to get the "gang" back, but that would have cost them WAY too much for a series like this.   It ended up (obviously) foregoing the TV for the big screen but going back to its original intended format hasn't done this one justice.  It just really misses the mark especially with it's use of the same characters but with different actors and actresses.  I won't go into detail about any of the actors and actresses but it's really hard to give someone gold and then later you try to spray paint some lead with a gold coating and expect people to just accept it.

It's almost an insult to us that they've put this out.  It would have been better if they had just gone with a new group of characters and just set it in the Zombieland world.  "Zombie kill of the week?"  Tallahassee says as he kills a zombie with a shot over his shoulder with a shotgun.  No..  Not even close!  The only original and funny part is when they actually show the Zombie kill of the week and that's a big 76 ball rolling down a parking ramp and squishing one of the zombies.  It's actually the only interested part of the whole first episode.

The group talks to a lady through their onstar navigation in the truck they are driving (complete with the 3 on the side) which just so happens to still work and the lady just so happens to know about all the survivors out there.  This little tidbit just makes me laugh and not in a good way.  I would go into more detail about this WHOLE part of the show but I won't.  I would like to say I paid attention to the whole thing but I ended up playing Candy Crush Saga about halfway through but I was listening..  And I did kinda give it my blurry eyed peripheral vision.

I wasn't happy with it from the beginning as soon as I knew this was supposed to be the same characters and that whole theme of unhappiness just continued through my experience with the film.  TV has been getting better and better for us horror people.  We've got Hannibal, The Following, (although some would say it's not horror and it's been kinda drawn out here for a bit) Dexter, True Blood, American Horror Story, etc.  I couldn't recommend Hannibal more as it is one of the better horror tv series that is on at the moment.

I will be watching Hemlock Grove here in a bit and I'll add on to this post with my thoughts on the first couple of episodes of that.  For all of you that are like me and we must watch just about every shitty movie or tv series that comes out just to have our own informed opinion on the situation here's the link to watch the first episode of Zombieland on Amazon: