We couldn't help but sign on for the 2nd year of Sinister Creature Con taking place in Sacramento California this Halloween season!  The list of the horror celebs that are going to be in attendance is amazing!  I can't wait to meet Lori Petty and Katharine Isabelle!  Also I can't wait to bring our brand of horror publication to the unsuspecting people of the convention.  THAT'S RIGHT!  We will be vending this lovely event!  Read below for more information about what will be going on and who will be in attendance!

Sacramento, CA. Cult film appreciators, horror lovers and practical effects enthusiast who want a place to appreciate the art of horror now have Sinister Creature Con for the love of the genre.

"I had no real idea what the Sinister Creature Con was going to be like. It was the first year, they had a good line up of celebrities attending and the vendor list was plentiful, but a horror con in Sacramento? To my pleasant surprise, it was a huge success! More people in attendance then I think anyone expected. All there to see their Rocky Horror Show idols, such as Barry Boswick, or Cleve Hall from Monster Man, or even me!

The great things about these types of conventions are everyone is there for the same reason. They love everything horror, always have. When younger we were labeled nerds and geeks, but now we have taken over and become the cool kids. As the famous tag line from Dawn of the Dead states - "When there is no more room in hell, the dead will walk the earth", well we are all walking to the next Sinister Creature Con next year and suggest you do to!" Award winner Howard Berger and past guest on 2015 line-up.

Sinister Creature Con is back for year two and even though 2015 hasn’t come to a close Sinister is wasting no time in order to impact the community and exposing the culture of practical effects and horror.

From live make-up demos to sculpting and painting, fans can also participate and create themselves in one of many workshops offered by award winning make-up artists and fabricators. Vendors and exhibitors will be on-hand with horror related merchandise.

Sinister Creature Con is now taking applications for vendors and offering sponsorship opportunities. Don’t miss out on the opportunity to be apart of one of the biggest cons to make its way thru Sacramento California. 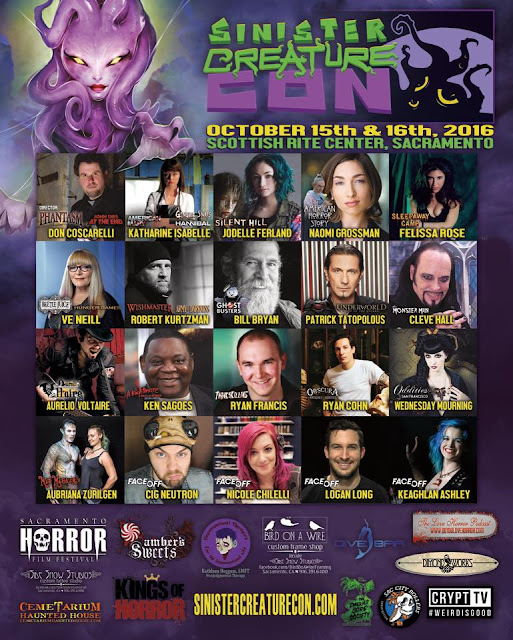