It's with great excitement that we announce that Gore Noir Magazine will be signing on to vend and sponsor both 2017 additions of Sinister Creature Con in California!!  Sinister Creature Con 2016 was such a great success that they are branching out to bring us a Spring and a Fall horror convention for Northern California.  The first convention will be taking place at Stockton Arena in Stockton California on June 10-11th, 2017.  The great folks that put together the convention are already making announcements on guests for this show and taking applications for vendors.  (highly suggested you grab a booth as the convention draws in TONS of real horror fans!) 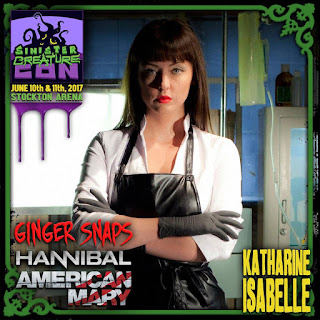 The second convention will be taking place at Scottish Rite Center in Sacramento California on October 14-15th 2017.  Last years show taking place in October was amazing.  It was a great way to get in the mood for Halloween by grabbing awesome products from the vendors as well as photos and autographs from the celebrities in attendance.  On top of all this they had after parties going for those of you who like to party with fellow horror fans.  We will make sure to have a drink and a couple billion shots with all of you crazy fans out there.  Are you ready?  Grab your tickets now and tell your friends!  You won't want to miss this!!
Posted by LckyFck at 9:35 PM